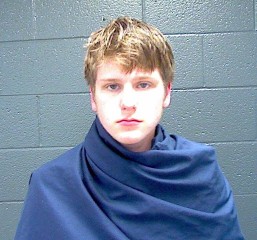 Officers had been working a rash of vehicle burglaries on the west side of town involving 3 suspects wearing hoodies with their faces covered. On 11-30-19, in the late evening hours, officers had received some information, via video, that the suspects had been seen in the area of McNiel/Seymour Rd checking on car doors. While officers were searching the area, they were flagged down by a citizen who saw the suspects around Berwick/McNiel. Officers were able to locate two of the suspects, both juveniles, on Berwick just east of McNiel. Both juveniles matched the description from the video. The third suspect, later identified as 17 year old Ethan Hart, was located hiding in the backyard of nearby residence. All 3 suspects were found to be in possession of items that had been taken from vehicles in the area. Hart was also found to be in possession of a handgun. All 3 suspects were arrested for Burglary of a Motor Vehicle. Hart was also charged with Unlawful Carrying of a Weapon, and Criminal Trespass.