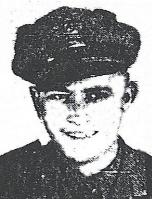 Today we honor Officer Charles Sleigh Carlisle.  On this date in 1933 he gave the ultimate sacrifice while serving the citizens of Wichita Falls, Texas.

Officer Carlisle succumbed to gunshot wounds received while he and his partner tried to question a man about an aggravated robbery.

The 20-year-old suspect was arrested three days later in Tulsa, Oklahoma. He was convicted of murder and sentenced to 25 years. His prison job, which was an auto mechanic, allowed him to drive outside of the prison. He was killed in an automobile accident on January 20, 1939. Officer Down Memorial