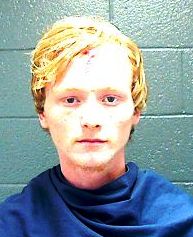 On Monday April 8th at approximately 8:45 am officers with the Wichita Falls Police Department were dispatched to the 4800 block of Johnson Rd in reference to a possible burglary.  Upon arrival officers spoke with the victim who stated that 22 year old Ryan Downey forced entry into her apartment, assaulted her, stole a necklace, took her car keys and drove off with her 2013 black Chevrolet Impala.

WFPD Officers observed a 2013 black Chevrolet Impala driving in the area of McNiel and Call Field and attempted to initiate a traffic stop.  The driver of the vehicle, who was later identified as Downey, refused to pull over and began to speed away in an apparent attempt to evade police. Downey struck a curb in the 4300 block of Seymour Rd at which time he jumped out of the vehicle and attempted to flee on foot.  He was caught by officers in the 4300 block of Seymour Hwy.

Downey was transported to the Wichita County jail without further incident where he was charged with burglary of a habitation, unauthorized use of a motor vehicle and evading.