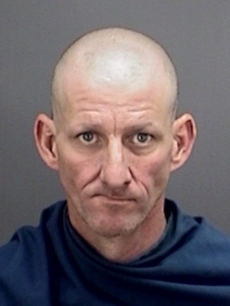 On Monday, January 15th, at approximately 8:30pm officers with the Wichita Falls Police Department was dispatched to the 3000 block of Speedway in reference to a check suspicious person. Officers were advised that a subject wearing camo coveralls and a beanie was on the reporting parties back porch. When they confronted the subject he walked off in an unknown direction of travel.

Officers were able to locate a subject matching the suspect description at the intersection of Speedway and Avondale. The subject was identified as 44 year old Randy Konovsky. A records check revealed that Konovsky had an outstanding warrant for burglary of a building.

The warrant stemmed from a report that was taken back on December 19, 2017 in the 4600 block of Cypress at Rider High School.  The reporting party stated that on December 15, 2017 between 3:05 pm and 3:44 pm a subject entered the school and began going to different offices and rooms within the school.  The suspect caused damage to various filing cabinets and doors.

Konovsky was arrested on the warrant and transported to the Wichita County jail without incident.