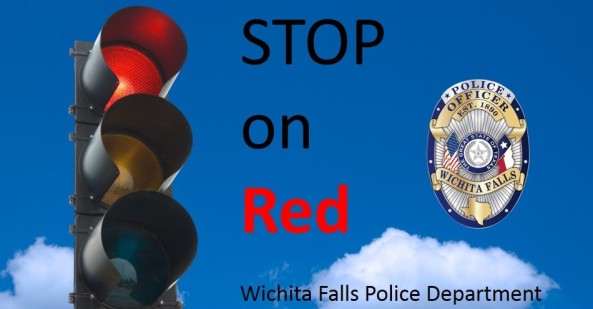 The Wichita Falls Police Department would like to remind motorists the importance of stopping at a red light.

A crash caused by a driver who runs a red light is more likely to result in serious injury or death. Most people run red lights because they are in a hurry, when in fact they only save seconds. Deaths caused by red light running are increasing at more than three times the rate of increase for all other fatal crashes.

According to The Insurance Institute for Highway Safety red light runners cause hundreds of deaths and tens of thousands of injuries each year. In 2015, 771 people were killed and an estimated 137,000 were injured in crashes that involved red light running. Over half of those killed were pedestrians, bicyclists and people in other vehicles who were hit by the red light runners.

The Texas Department of Transportation reported in 2015 that over 21,000 crashes occurred in the state that were caused by a driver running a red light; 108 of those crashes resulted in the death of an individual.

In 2016 there were 116 crash reports filed with the WFPD where a driver running a red light was a contributing factor, one of which resulted in a fatality.

Remember to always “Stop on Red.”