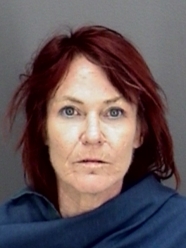 On Monday, October 9th, at approximately 12:47 am a patrol officer with the Wichita Falls Police Department stopped a tan 2004 Chevrolet Avalanche for a traffic violation in the 2900 block of Hamilton.  The vehicle was occupied by two females. The driver of the vehicle was identified as 58 year old Vickie Austin.  When officers asked Austin for her driver’s license she stated she did not have one.

As officers were doing an inventory of the vehicle prior to having it impounded due to the driver not having a valid driver’s license officers located an open purse in the front seat. Inside the purse officers located a metal rod that is common with drug use along with two glass pipes.  A further search revealed cubes of a white substance weighing 4.9 grams wrapped in a small plastic bag, another bag containing a white crystal type substance weighing 1.2 grams, multiple pills and over $1,600.00 in cash.  The cubes showed a positive field test for cocaine and the white crystal showed a positive field test for methamphetamine. The pills were identified as Alprazolam which Austin was unable to provide a prescription for.

The passenger was released on scene.