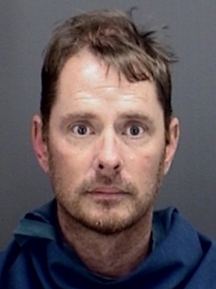 On Wednesday, September 20th, at approximately 11:15 pm officers with the Wichita Falls Police Department were dispatched to a residence in the 2000 block of Indian Heights Blvd in reference to a check welfare.  While officers were responding they were advised that the home owner had called 911 to report someone had made forced entry into their home.

When officers arrived on scene they observed a broken window and could hear someone yelling for help.  Officers rushed inside and discovered the victim bleeding from his head. He was pointing across the room to a male who was lying on the floor.  Officers were able to detain and identify the male as 46 year old William Dillard Muirhead.

Officers spoke with the victim who stated he heard the distinct sound of broken glass coming from the downstairs part of the residence.  He advised that he called 911 for police assistance and while he was on the phone with 911 Muirhead came upstairs and went into his bed room. The victim advised William then began striking him in the face with both of his closed fists. He stated Muirhead continued the assault by taking the top lid of a toilet tank off and striking him multiple times about the head. It was at that time that officers entered the residence.