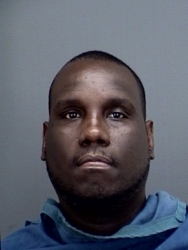 On Monday, May 8th, at approximately 8:00 am officers with the Wichita Falls Police Department were dispatched to the 1200 block of Central Freeway to the Fas Pac in reference to a possible disturbance.  Upon arrival officers were advised that 44 year old Reginald Pope had been involved in an altercation with an ex-girlfriend at this location.  Officers then responded to the female’s residence in the 1300 block of Central Freeway in order to check on her welfare.

When officers arrived at her residence they saw Pope inside.  They also located the female and observed marks on her neck and a cut on her right hand.

The victim stated that she was in the bathroom putting on make-up when she heard the front door open and assumed that it was her boyfriend returning from the store with coffee.  Pope entered the bathroom behind her and started arguing with her about her new boyfriend.  She stated that Pope wrapped his arm around her neck and started choking her while he dragged her backwards out of the bathroom and into the living room.

Once in the living room, Pope threw the victim down on the couch and jumped on top of her while punching her in the face and head.  The victim stated that she tried to reach her phone on the couch to call 911, but Pope took her phone and put it in his pocket preventing her from calling for emergency assistance.  She told officers that when she tried to get up Pope started kicking her in the torso.  It was at this time that she heard officers coming up the stairs to her door and that Pope stopped the assault and sat in the chair telling her to be quiet.

Pope was arrested on multiple charges to include burglary of a habitation, family violence and interference with an emergency telephone call.  He was transported to the Wichita County jail without incident.

WFPD Officers responded to the URHCS emergency room on 06-11-21, at 11:48 pm, to investigate the death of a one-year-old child. The child had been transported by a personally owned vehicle to the hospital where she was pronounced dead.
WFPD FUR-EVER FRIDAY!!!
We are humbled and honored to serve such a supportive and appreciative community! Today, Golden Chick stopped by and provided lunch to our officers and civilian staff. Thank you so much! We appreciate you!!!
UPDATE: On Saturday, just one day after this originally posted, Lotus was adopted by her new fur-ever family!
BURGLARY SUSPECT ARRESTED!
Loading Comments...
Comment
×
%d bloggers like this: