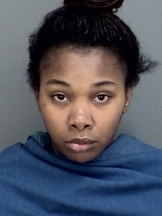 This morning, at approximately 12:30 am, officers with the Wichita Falls Police Department responded to the 4800 block of Brookdale in references to possible shots fired.

Upon arrival officers spoke with the victim who stated that she was inside her apartment with her boyfriend when she heard the sound of glass breaking.  When she went to investigate she saw 28 year old Lonisha Jones standing outside of her apartment yelling at her to come outside and making threats to assault her.  The victim stated that her boyfriend went outside to confront Jones at which time Jones made attempts to climb through the broken window while continuing to make threats to harm the victim.  Jones was heard saying that she was going to come back and shoot up the apartment.

Officers located Jones at Mistletoe Drive and Dennis Boulevard.  Jones was placed under arrest and transported to the Wichita County jail where she was charged with burglary of a habitation.