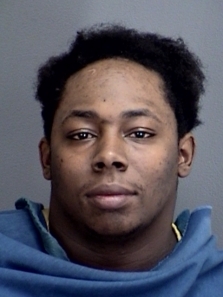 On March 7th at approximately 7:15 pm officers with the Wichita Falls Police Department initiated a traffic stop at 7th and Baylor.  They made contact with the suspect who was later identified as 24 year old Trey Moore.  Moore initially gave officers a fictitious name.

When officers went to place him under arrest for failure to identify he ran from officers.  Officers pursued Moore on foot and deployed their conducted energy device (CED or taser).  Moore continued to fight with officers.  Moore was able to can control of one of the officers CED at which time Moore pointed it at the officer’s face.  The officer deployed open hand tactics and knee strikes at which time she was able to regain control of the weapon.  Moore continued to run from officers and entered a residence in the 700 block of Warford. Officers located him inside the residence and once again he attempted to flee but officers were able to gain control of Moore and place him into custody.

A search incident to arrest revealed that Moore was in possession of various identifications and social security cards from multiple people.

Moore was transported to the Wichita County jail where he was charged with taking a weapon from a peace officer, failure to identify, evading arrest, resisting arrest, criminal trespass and possession of identifying information.