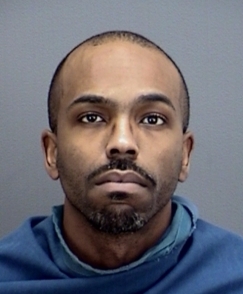 On Wednesday, February 22, at approximately 6:00 am officers with the Wichita Falls Police Department were dispatched to the 4200 block of Hughes in reference to a possible aggravated sexual assault.

Upon arrival officers spoke with one of the victims who stated that just after midnight while he and a friend were sleeping he was awoken to being hit on the head.  The victim stated that a subject, later identified as 33 year old Drew Mathis, was standing over him with a handgun.  The victim stated that he saw Mathis sexually assault his friend. After the assault Mathis and the second victim left the residence together.

Through a records check officers learned that Mathis was associated with an address in the 600 block of Sunset. Officers went to the address to locate the second victim and check on their welfare.  There was a vehicle in the driveway that was registered to the second victim.

After officers knocked on the door and announced their presence the victim eventually came out.  Officers saw the door close immediately behind them and heard the sound of the door being locked.

Officers set up a perimeter on the residence.  At approximately 8:15 am Mathis exited the residence without incident and was taken into custody.  He was transported to the Wichita County jail where he was charged with two counts of burglary of a habitation and aggravated sexual assault.

On this special day, we would like to wish moms everywhere a very happy and safe Mother’s Day! Thank you for all you do!
We would like to wish all the teachers out there a Happy Teacher Appreciation Week.
Today, Officer Hughes and Officer Masterson visited with the Kindergarten classes at Cunningham Elementary as they learned about community helpers!
An early morning check welfare investigation had Officer Clayton going door to door. The rain at that point was torrential, and he got soaked. He was in good spirits, however, by the look of the photo.
UPDATE:
As we wrap up National Telecommunicator Week, we would like to take one more opportunity to let our dispatchers know just how much we appreciate them!
Loading Comments...
Comment
×
%d bloggers like this: