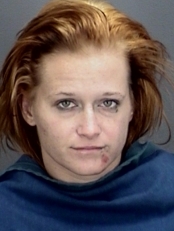 On 01-01-17, officers were dispatched to Wal-Mart on Lawrence Rd in reference to a previously barred subject being inside the store.  Upon arrival, officers met with Wal-Mart personnel who directed them to the suspect, 29 year old Kay Martin.  Records check revealed that Martin had been barred from the location in October 2016.  As officers tried to make the arrest, Martin repeatedly resisted and was able to break free.  Martin exited the store with officers in chase.  Once in the parking lot, Martin tried to hide underneath a vehicle but the vehicle drove off running over her leg.  At that point, Martin was taken into custody.  During the investigation, Martin lied about her name only to admit later that she had lied because she had a warrant and did not want to go to jail.  She was also found to be in possession of marijuana.  After receiving medical clearance, Martin was transported to jail and booked in for the following charges: