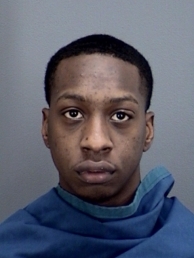 Sunday night at approximately 11:00 pm officers with the Wichita Falls Police Department responded to the 4200 block of City View in reference to a possible aggravated assault.

Upon arrival they spoke with the reporting party who stated that two black males, one wearing a backpack and the other a football jersey, had just robbed his tenant. When he went to confront them one of the suspects fired two rounds from a handgun striking his white Chevrolet pickup.  Officers were able to locate what appeared to be a bullet hole near the rearview mirror on the driver’s side.

Officers then spoke to the resident who stated that earlier that night a friend came over to borrow some money.  The victim stated that when the friend came into the residence two other subjects came in with her.  One of the subjects, later identified as 21 year old Zacharei Kelly, pointed a handgun at the victim and then told the second subject, later identified as 19 year old Kyreese Williams, to grab the victim’s money, cigarettes and phone.  The suspects also demanded that the friend who came to borrow money give them her car keys.  When she refused, Kelly struck her in the head with the handgun and took the keys to her white Dodge Durango.  Both suspects then left the residence and attempted to drive away in the vehicle only to get it stuck on a log that was in the driveway.  The suspects then fled southbound on foot in the 4200 block of City View.

Officers set up a perimeter around an over grown field where the suspects were seen running into.  They were able to locate both suspects along with a handgun and backpack.  Both Kelly and Williams were transported to the Wichita County jail where they were charged with two counts of aggravated robbery and one count of aggravated assault.

Do you want to know what is happening in your neighborhood? Would you like to be able to filter that activity by date, date range, and type of activity?
*** BEWARE - PHONE PHISHING SCAM ALERT ***
We here at the Wichita Falls Police Department would like to introduce the newest member to our department, K-9 Officer Lock.
MAN ARRESTED FOR MURDER
We are NOW HIRING Public Safety Dispatchers and 9-1-1 Operators! Come and join our team!
A couple of our officers take a “snow selfie” before starting their shift!!
Loading Comments...
Comment
×
%d bloggers like this: