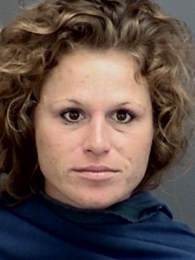 On July 26 at approximately 9:40 pm officers with the Wichita Falls Police Department observed two females walking down the middle of the street in the 1300 block of 32nd Street.  When they stopped to speak with them they observed that one of the females, who was later identified as 33 year old Erica Acuna, appeared extremely nervous.

For Officer safety they conducted a pat down for weapons.  They observed a bulge in one of Acuna’s pockets.  When she was asked what it was she replied, “it’s methamphetamine.” Officers located a plastic bag that contained a crystal like substance in it that field tested positive for methamphetamine.

Acuna was arrested and transported to the Wichita County jail without incident where she was charged with possession of a controlled substance in penalty group 1 under 4 grams.