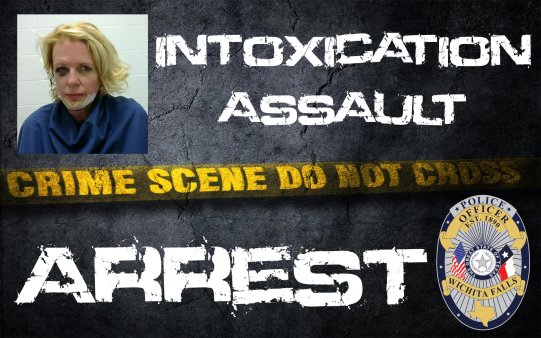 On 03-24-16, at approx 2337 hrs, WFPD officers were dispatched to the area of Maplewood & Taft in reference to a reckless driver in a red pickup.  Upon arrival to the intersection mentioned above, officers found the vehicle high centered on the curb with the front right tire broken off and stuck under the front end.  The driver and sole occupant, 48 year old Patsy Crispin, was found in the driver’s seat slumped over the center console with minor injuries.  Crispin smelled of alcohol and told officers that she had been drinking at a local restaurant.  She failed administered field sobriety tests at the scene.  Investigation revealed that prior to wrecking out,  Crispin had struck a vehicle at the red light of Southwest Pkwy and Maplewood sending that driver to the hospital as well as 2 parked vehicles.  Crispin was arrested for Intoxication Assault and 2 counts of Duty Upon Striking.