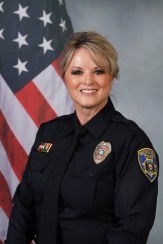 Women’s History Month is an annual declared month that highlights the contributions of women to events in history and contemporary society. It is celebrated during the month of March.

The Wichita Falls Police Department will be highlighting various Officers within the department and the valuable contributions that they make.

Detective Patricia “Trish” Duncan-Ferguson was hired on January 8th, 2001 and graduated from the “greatest WFPD academy, the 54th.” This was the largest academy for female officers having had 6 to graduate.

Detective Duncan is currently assigned to the Criminal Investigation Section where she works with the Crimes against Property Unit.  She has worked all areas of Patrol where she also served as a Field Training Officer.  She is also on the Hostage Negotiations Team.  She has received multiple awards to include Police Excellence and Certificate of Merit.  She holds an Advanced Peace Officer Certification.

“I can honestly say the other female officers in this department and worldwide have all been an inspiration for me. We have all worked very hard to get where we are. Each bringing their differences but with one drive, and that is to be a part of a community, to serve and protect.”

In her free time she plays music with her church band and she has been given the honor of singing with her trio, “NameSake” for many years at the WFPD Memorial Service.