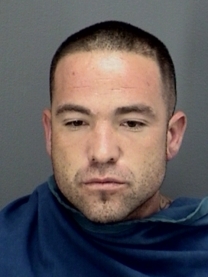 On March 3rd at approximately 8:30 pm officers with the Wichita Falls Police Department were dispatched to a business in the 3600 block of Kemp in reference to a possible forgery in progress.

Upon arrival officers spoke with the store employee who stated that a male came into the store and attempted to cash a check that they believed to be fake.  The employee pointed out the suspect which was a white male wearing a white shirt and grey sweatpants.

When officers approached the suspect and asked him to walk to a less crowded portion of the store the suspect began to walk with them and then took off running toward the front door.  He exited the building as officers began to chase after him.

The suspect ran to the rear of the building where he jumped into the bed of a running white pickup truck and yelled at the driver to drive away.  The truck began to drive away but officers gave orders for the driver to stop, at which point he did.

Officers then placed the suspect into custody for evading.  He was identified as 30 year old Sean Hoffman.

Officers continued to investigate the initial forgery call and discovered that Hoffman attempted to pass a forged City of Wichita Falls check.

Hoffman was transported to the Wichita County jail without further incident where he was charged with Forgery, Evading, and a Parole Violation warrant.