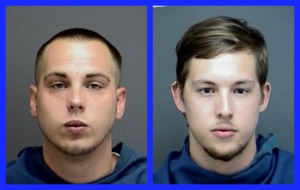 Today, August 21st, detectives with the Wichita Falls Police Department served two murder warrants in connection with the June 2nd murder of Wichita Falls resident Dominique Thrasher.  The murder warrants were served on 20 year old Blayne Brooks and 26 year old Justin Love.  Brooks is currently in custody in Wichita County Jail on an unrelated Aggravated Robbery warrant.  Love is in custody in Colorado springs, CO  for parole violation.   Detectives traveled to Colorado Springs to speak with Love in reference to this murder.  They received new information that helped in the development of the case and the warrants being issued.  A third person, Whitney Obrien has also been arrested for the Thrasher murder.

On June 2nd at approximately 12:24 pm, officers were dispatched to the intersection of Yuma and Gunnison in reference to a shooting.  a black male later identified as 21 year old Dominique Thrasher was walking near that intersection when a dark colored SUV approached from the 3800 blk of Yuma.  Multiple gunshots were fired from the vehicle striking the victim.  The vehicle fled and was last seen turning south on Ruidosa.  Thrasher was transported to the hospital where he was later pronounced dead.  This was the first homicide of 2015.