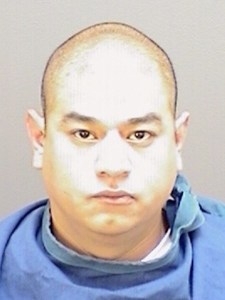 Last night at approximately 10:08 pm Patrol Officers with the Wichita Falls Police Department stopped a white and tan Chevy Tahoe for a traffic violation in the 2200 block of Talunar.

Officers made contact with the driver who was later identified as 34 year old Jesus Contreras of Wichita Falls. As Officers were speaking with Contreras they observed two large television sets in the back of the vehicle.  Contreras gave consent for Officers to search the vehicle at which time they located, along with the televisions, two gaming consoles, approximately twenty video games wrapped in a bed sheet, a “piggy bank” and a pry bar.  Officers also located a hospital ID bracelet.

Officers were able to make contact with the person listed on the ID bracelet and found that they lived at a residence in the 3300 block of Buchanan.  Officers responded to that location and discovered that the front door of the residence had been pried open and the residence showed signs of being recently burglarized.  The homeowner identified the property Officers found in Contreras’ vehicle as being theirs and at no time did they give consent for Contreras to be in their home.

Contreras was arrested and charged with Burglary of a Habitation.

The City of Wichita Falls Job Fair is happening today until 4pm at the Public Library downtown! Stop by our dispatch table and get ready for your new, exciting career!!!
Are you interested in becoming a WFPD dispatcher or 9-1-1 call taker? If so, we are now hiring and looking for you!
Retired WFPD Officer John Sims passed away on Sunday, April 4. Our thoughts and prayers go out to his family and friends.
In preparation of National Telecommunicators Week which begins next week, our dispatchers were honored at this morning’s City Council meeting for their hard work and dedication to our citizens!
A huge THANK YOU to Starbucks on SW Pkwy for hosting our “Coffee with a Cop” event this morning! We love interacting with our community and can’t wait until the next one!!!!
From our family to yours, have a safe and Happy Easter!
Loading Comments...
Comment
×
%d bloggers like this: